We were up bright and early for our big driving day.  Today was our ‘Road to Hana’ day! With guide books read and trip advisor consulted, plans were made. Lunch was even packed with the threat of no food stops along the epic trail! So those who had gone before us warned.

Our expert driver- Mr X alias Uber Denis navigated the 108 one way bridges, numerous hairpin bends and a demanding Ms X who wanted him to stop whenever she saw a trickle of water. She couldn’t understand why he refused when it was on the other side of the road.
There was many a one-way bridge when a leap of faith and fingers crossed were called for. 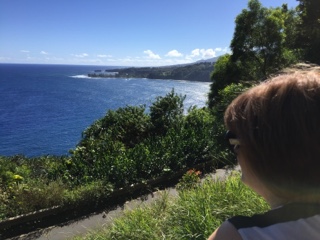 Ms X kept Mr X bouyant through the drive by reminding him it was all about “the journey, not the destination”
At the halfway point, they were rewarded with coffee and freshly baked banana bread which apparently is  the traditional halfway pit stop tradition. 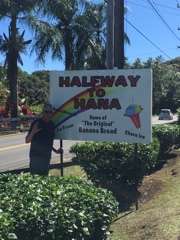 Although the hiking was not Cinque Tera standard, Ms X was once again called a MARINE, due to her skills in hiking in thongs. She didn’t even whinge either. What a trooper. 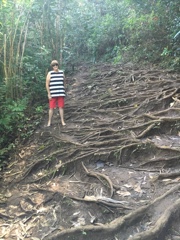 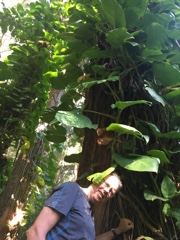 And also the water holes where he tried to convince Ms X to follow him. 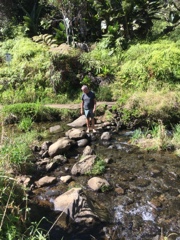 But Ms X told him that someone needed to stay on land to take the photos!
Yes, you have to do the drive if you in Maui. Is it as good as the Great Ocean Rd? Hmmm, don’t ask Uber Denis. You know what he would say. Ms X would say that ‘it’s different’
Once you reach Hana, you may be rewarded with a picnic whilst looking at the black volcanic sand. 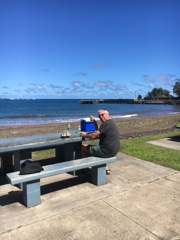 And then? You have to get right back on that road and drive back from where you came from!!!
Uber Denis had done such a great job that Ms X rewarded him by agreeing to a golf-club-crawl on the way home. Well, two golf clubs anyway. 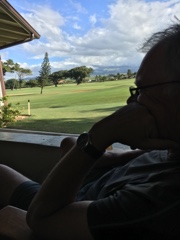 where Uber Denis dreamt what could have been if only Stevo or Frosty had been along on the Road to Hana with him instead of Ms X.
Dinner at OCEANSIDE finished off a great day. 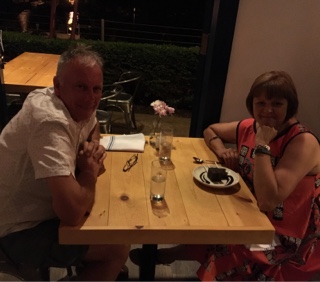 One thought on “A Leap of Faith to Hana with Uber Denis.”