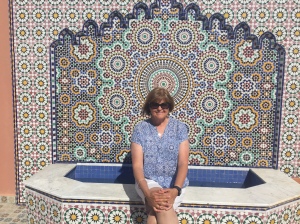 To stay in the newer part of Marrakech or in a traditional riad within the walls of the Médina? That will be a question to ponder for those planning on visiting this city. Mr and Ms X chose the latter as staying in a big modern hotel for them may have lost the Moroccan-ish atmosphere they were seeking. However that choice comes with some challenges.

It’s not for everyone and one needs to be prepared, as it’s bloody hard work!

Stepping out of the walls of the quiet and peaceful riad you then are faced with noise, crowded streets, absence of footpaths and absence of street signs. You share the roads and winding laneways with souks, motorbikes, taxis, tuk tuks, donkeys, horses and the townsfolk who are all battling against each other to get somewhere. You look for landmarks like the tower on the big mosque as opposed to the towers of all the other nearby lookalike mosques. 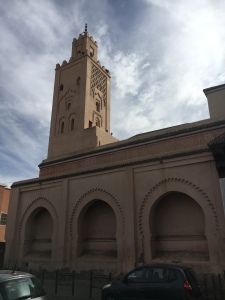 You remember the place selling olive oil from the biggest vat you may ever see. You pay attention to the nearby souks (as opposed to the ones further up the road). Mr and Ms X had a former palace nearby with 5 different armed guards each day in 5 different uniforms all guarding an empty site. Together, all those landmarks would hopefully point them home each day.

One amazing thing was the absence of aggression from souk sellers or safety worries. Within all the madness, the people were extremely helpful and polite. Restaurants would invite you into their establishment just like they do on Lygon Street in Melbourne, however when you decline they would almost all say, “maybe tomorrow? maybe later?”

Hidden within the modern section of Marrakech is the Jardin Majorelle designed and gifted to Morocco by Yves St Laurent and his partner, Pierre Berge. These gardens were exquisite and worth the wait in line.

Ms X has a sister who has an amazing garden that features succulents and our travellers knew she would have loved some cuttings!! 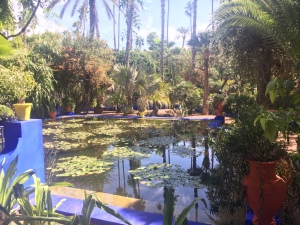 Amid the harshness of this city with the Sahara nearby, this garden demonstrated what can be done with drought resistant plants.

There are other areas of interest to check out in Marrakech eg. Saadiens tombs and the Bahi Palace, which our travellers did, however it was almost the walk from their riad to each place which played major parts in the whole experience! 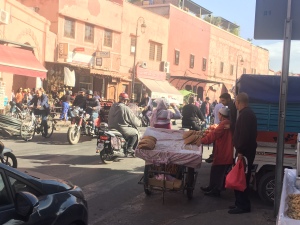 Navigating through the main square, trying to avoid the snake charmers and the like, whilst trying not to get in the way of obstacles was almost part of a game.

Stopping along the way for a coffee and just observing always gave new insights. Mr X having his table and chair taken from him whilst Ms X was in the bathroom was hysterical. The cafe had too many tables out so the officer in charge of such matters removed said table and put it in his makeshift trailer but the cafe owner didn’t give up without a fight!!

Our travellers did need some respite from their local neighbourhood so took a day trip to Essaouira, which is on the western coast. Along the way they visited a women’s co-op where they were harvesting argon. Ask Mr X what he thought of the tasting sample as he was the only one of our group who scoffed two! Along the way there was a stop to see the source of this product- the argon tree. Looks like Mr X is not the only one who quite fancies this fruit. Yep, the goats love it too!

Essaouira has some swanky beach resorts for the cashed up Moroccans and you guessed it, it has an old town as well. Having already checked out the Croatian Game of Thrones aka ‘GOT’ location sites on a previous trip, this town provided some season 3 places. It would be interesting if you watched it (Ms X: NO) or you could remember the episodes, (Mr X.:NO) 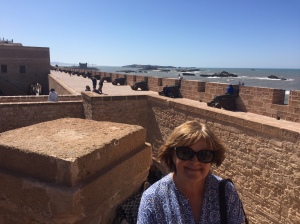 The town was a contrast to Marrakech and the scenery along the way provided an insight into the harshness of the place. The olive groves in areas left you wondering about the tricks they do with water!

So here’s some advice from our travellers:

Whilst asking someone who they thought was a local, for directions, both our travellers were offered a job when they returned home. It turned out that the ‘local’ was from Sunshine in Melbourne and was in Marrakech doing business linked with an education practice. Once this ‘local’ realised his two lost tourists were teachers from Melbourne, it made his day. Just goes to show you how small the world can be sometimes and also how influenced you become by stereotyping.

One thought on “Morocco: Part 2 ( the Game of Thrones location tour continues)”