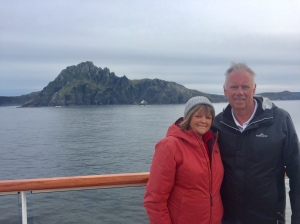 Ms and Mr X had heard of Cape Horn but could they answer any questions on “Who wants to be a Millionaire” on the subject? Nope. Mr and Ms X knew nothin’ about Cape Horn really.

What they know now:

Cape Horn was named by an explorer after the Dutch city of HOORN in the Netherlands, from whence they came.

Over 10,000 sailors at least are thought to have died whilst sailing around it.

There’s a big volcanic rock amongst the smaller islands on the archipelago and this one has a lighthouse.

There’s currently a family of 4 living at the lighthouse, which includes 2 kids ages 9 and 11. They feed information on weather etc to those who will be sailing in its waters. 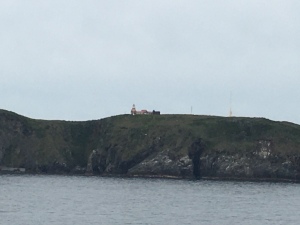 These retirees came prepared. Ms X had even saved her anti- nausea medication that her travel doctor, otherwise known as Dr. Death had given her. She had scarf, beanie, gloves and North Face coat at the ready however it was a non- event. It was so so so so so smooth! It was not cold. She only put her hat on because it was a bit windy and her hair was in her 👀.

The question left unanswered about this spot was ‘what does that family do all day and night?’

So our travellers pondered this over breakfast 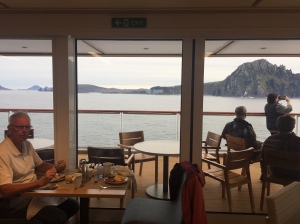 and again, from their balcony. 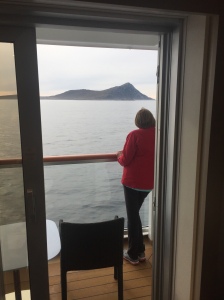 One thought on “Cape Horn Cruising.”