On route to York, Mr X suggested to Ms X that they take a detour to Downton Abbey. It meant giving up their scheduled ‘walking tour’ of York. Ms X jumped at it as it would mean that their special heritage passes could be used yet again and of course, Ms X does love a bit of Downton!.

Melbourne’s ‘Monash carpark’ was experienced twice on the journey and they wondered whether this was going to be worth it but they soldiered on to Brodsworth House.
As soon as they had parked and made their way up the winding pathway, Ms X was full of superlatives eg. ‘Look at the house peeking through the trees’ ‘isn’t it grand’ ‘I can see Papa wandering through this garden’. Mr X was a touch more reserved. ‘ I don’t think this is the house. It’s a different colour. Downton doesn’t have a verandah at the front’.
Ms X tried to ignore Me X. How did he know such details, after all he was usually a reluctant viewer.
Ms X continued trying to convince this sceptic, as Ms C and she had found it in the tour guide. It had said ‘Downton is made up but bodsworth is for real’ A quick google told us that the Downton house was 3 hrs away!!!!
So, they ended up exploring the house and it was actually Ms X who had to drag Mr X out of the place in the end. you see, Brodsworth House was actually commissioned by the government as a military headquarters / Dunkirk evacuee hospital/ Dad’s Army……. EXACTLY like Downton was. The Lord of the manor actually swanned around the place as did Papa Downton in about 5 episodes so Ms X was happy to pretend and tick a Downton lookalike off. 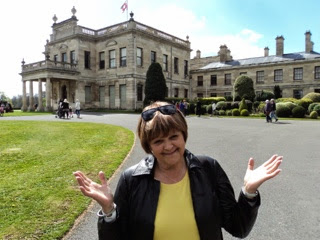 Back on the road and off to York to check in at a lovely B&B, Linnies.
A walk around the town was the rest of the day’s activity. Mr X likened it to Barcelona with the arrow streets. The minster(cathedral) dominating and the quaint little independent shops, it was a great place in which to get lost…. That’s what happened with 2 York locals setting them on the correct path at one stage.
Highlights of York…… 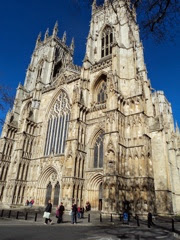 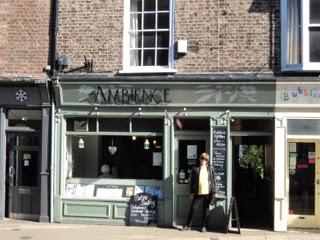 A coffee shop with so much ambience that they even name it that!! ( lovely back garden to enjoy the sunshine whilst looking at the Roman Walls) 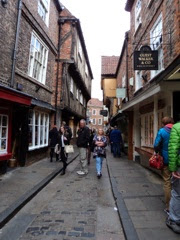 Wandering through the Shambles 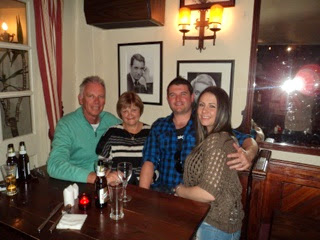 Catching up with Kieren and Charlotte for dinner 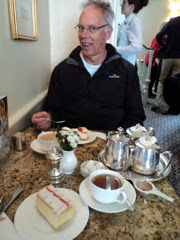 And watching Mr X order tea and cheesecake at the famous ‘Betty’s!’