Skip to content
Date: April 22, 2014Author: backpackingwithwheels 0 Comments
A long driving day saw our tourists arrive in Perth late afternoon. Perth being the former capital of Scotland.
The reviews had been read and the Station Hotel had been chosen as it appeared to tick the boxes as well as being very affordable. A welcoming email had also been received inviting the travellers to pre- dinner drinks at 6.30 that evening in the Garden Bar where the first drinks would be complimentary. It also said it would be a great opportunity to meet the other guests. How lovely and so inviting. They just had to let reception know.
As they pulled up in front of their chosen place to lay their heads that night they were very happy. 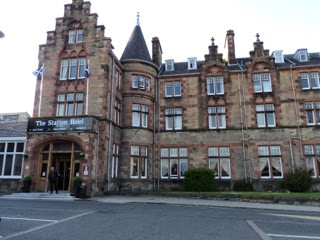 As they entered the lobby, Ms X spied a signed photo on the mantle of Colin Firth, thanking the hotel for their recent hospitality for his stay….. How intriguing…even more intriguing was the information displayed about other former guests of the hotel…. Maggie Thatcher, Queen Lizzie and even Queen Victoria. 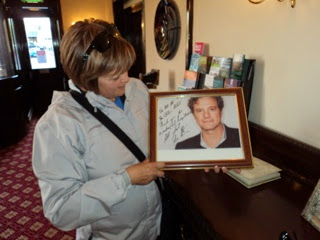 No, she didn’t put it in her bag.
They were greeted by Ivanka, a Russian who checked them in. Now Ivanka (Manuel/ Polly) was wearing the tightest dress that you could imagine. Could she breathe? Had she been sewn into it?
Checking in at the same time was a woman with a bulldog. Like Scragger, Footscray’s mascot. Would Scragger be attending the pre dinner drinks they wondered.
They did begin to feel a little worried about their room however all was ok. 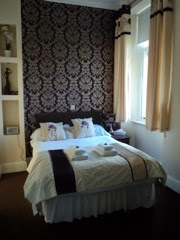 After an exploration of the town 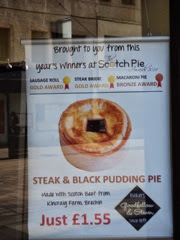 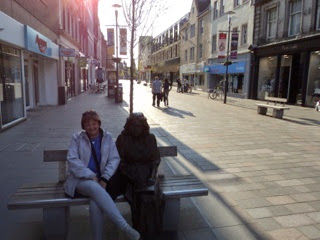 they arrived back in time to attend the welcome drinks and so let Ivanka know.
‘I don’t know what you mean.’
‘We received an email’
‘No body told me anything’
‘It’s also in the information folder in the room’
They decided to head to the garden bar anyway however Ivanka was hot on their heels.
‘Where are you going?’
‘We are going to the Garden Bar’
‘It’s not open’
They decided to skip drinks and head straight to dinner….. Hmm they wondered if the dining would be booked out 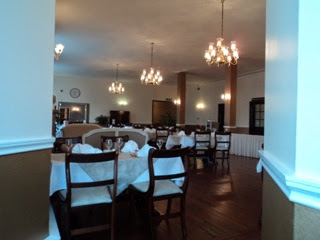 they didn’t have to worry.
Suddenly Ivanka the Hotel receptionist metamorphised into Invanka the waitress producing the wine list and menu.
They struggled with the menu wondering what Colin or Maggie would have chosen. The burger or the curry? The curry won, just.
Mr X told Ms X that she should send a reply to the welcoming email telling them of their shortcomings.
She did as she always does what her husband says and she signed it from Ms and Mr X in Room 37.
She had JUST pressed send, when Mr Fawlty appeared for the first time. He sidled up to our table and introduced himself as Daniel and like Basil he was dithery and not real sharp but unlike Basil he was lovely and friendly. he chatted about so many topics.
Mr X then decides to tell him about the non existent happy hour in the non existent garden bar. Basil was over apologetic and was offering more drinks to make up for their  faux pas. Meanwhile the meal arrives and it looks terrible – like a hot pot packet microwaved meal. Mr X thought he could even taste the cardboard.
Ms X meanwhile was trying to work out how she could recall the email she had sent given that Basil would now think that they were still complaining. Basil popped back to the table to see how their meals were. “DELICIOUS” they both chorused dishonestly. There was no way they could offend him. They were thinking that Ivanka in the tight dress had also made the curry.
Basil popped back again, discussing Scotland’s current independence vote. Also talked about was Germany’s chancellor and Julia Gillard.
Did we want sweets?’ Ms X surprised Mr X by saying yes. Partly because she wanted to please Basil who was bout to get the cranky email but also to get rid of the nasty curry taste. To her surprise, the Apple Crumbe WAS delicious!
Basil popped back AGAIN and poor Ms X couldn’t take it any longer- Catholic guilt kicked in and she found herself blurting out ‘Look Basil, I sent you an email cos he made me and it was before we met you and I’m sorry. Please ignore it’
Lovely Basil chuckled and said ‘ so you want me to delete it without reading it?
She grimly nodded as she ate her crumble looking at the Garden Bar sign 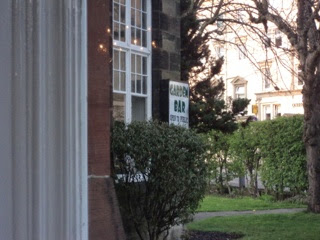 While Mr X watched Ivanka.
Basil bid them a good night’s sleep and said he would catch them tomorrow morning at breakfast.

The next morning Ivanka’s cousin Ivana was working the front desk, the dining room and the kitchen whilst Basil swanned around socialising with the guests. He made a beeline for the Aussies yet again, this time his topic was Queen Lizzie’s 88th birthday that day.

Ms X started to turn on Basil as he didn’t agree with her comment about Lizzie needing to retire on her birthday and also because poor old Ivana had to wear that tight tight dress. It turns out that was the uniform and poor old Ivana was heading for a guest spot on “What not to wear”. That’s Basil making her wear that unflattering square of cloth she kept repeating as she complained about her dry scrambled eggs.

As they checked out they held the door open for Scragger.
FOOTNOTE:
On further investigation, Colin Firth was there as he was filming scenes for The Railway Man at the Perth station across the road. 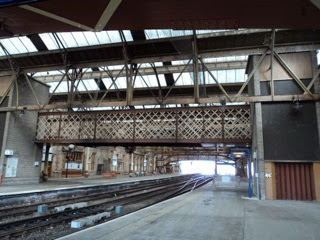 Don’t think Nicole and Keith stayed there as we believe they don’t like curry.