‘You’ll love Edinburgh’ Ms C and Ms A had both told our travellers. Both siblings had toured Edinburgh on separate occasions and had both enjoyed the place immensely. They had talked it up so much that the bar had been set quite high.

Now the weather can play a big part when you are travelling. Sunshine can perk you up and give you the energy required to put in a long day of sightseeing. On the other hand, rain or wind can can have the opposite effect. First impressions are also important. They are hard to shake.  Mr and Ms X encountered grey skies, wind, rain and cold during their first day in Edinburgh. Not a good start. 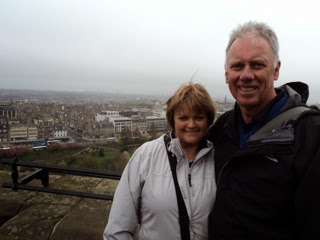 The UK is full of castles so Edinburgh Castle had lots of shoes to fill. Mr X thought it was “impressive, inspiring, awesome and everything he imagined it to be”.
Ms X thought it “was huge and picturesque on the hill however had lots and lots of war related displays so it was hard to keep the focus”. And it was cold and rainy and the war stuff was all indoors so it did provide a respite. 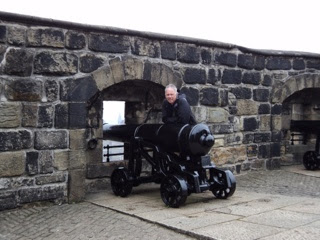 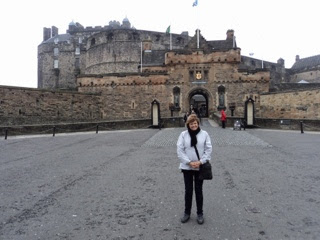 Hollyrood Palace is another haven when it’s cold and windy and rainy. So when Ms X suggested that as the next activity, Mr X wasn’t complaining even though they were not into the royals and a bit over palaces. The idea of the indoors was inviting however, walking the Royal Mile yet again that day wasn’t that attractive a proposition. The two had already walked from their B&B to the castle!  They soldiered on. 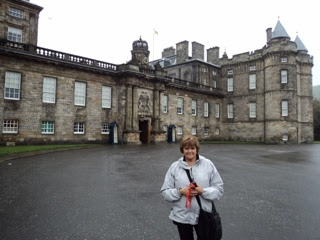 No, that’s not the castle, it’s the palace. They just both happen too be grey and gloomy. Remember it’s cold and rainy and windy………
………… And then it’s a new day and the weather changes and the sun comes out and Edinburgh looks grand. 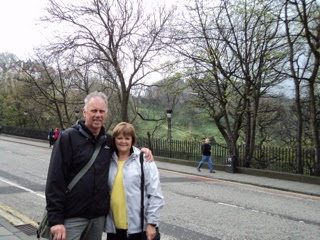 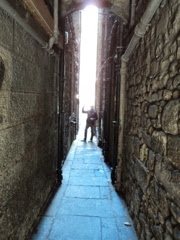 You now want to stroll in the beautiful gardens, walk through the Closes (laneways) and you are even happy to pose with random people….. 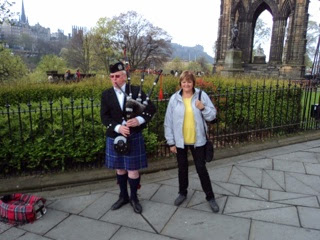 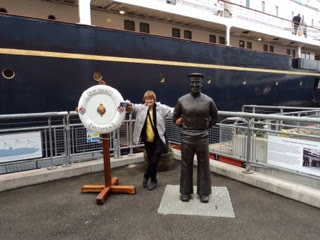 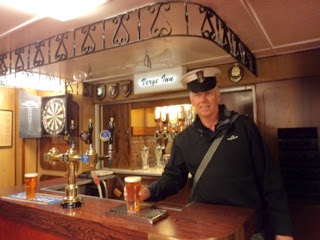 ……. although you then complain about all the wasted money on that floating palace! 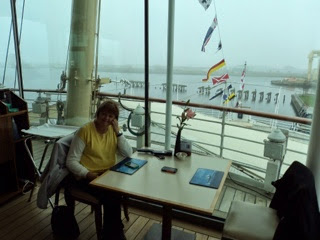 Edinburgh is a great place with lots to see, do and experience. It even has a statue and pub that is a tribute to the memory of the amazingly loyal ‘Bobby’. 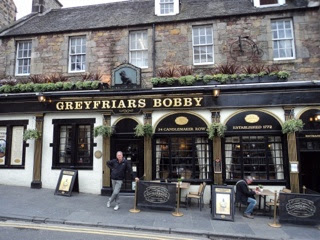 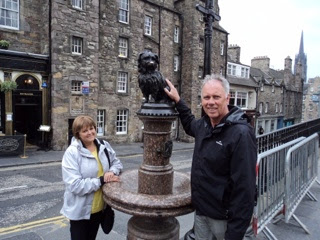 So next time you are visiting Edinburgh Ms and Mr X, stop complaining about the weather! Make sure you stay again at Fraoch House where you can catch up with Gareth and the new ’Mrs Gareth’ as well as the wonderful Kat because that is a top place as well. 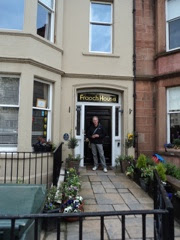