It had been decided that Negombo would be the meeting place for the 5 travellers. The Mebourne backpackingwithwheels crew arrived first and were able to suss out the surrounds, enjoy the sunshine and pool and deal with some slight jet lag.

The international backpackingwithwheels team were awoken from their slumber after their early flight arrival via the novelty ‘bouncing yellow ball in the window’ trick by a very keen-to-see-them Ms A. A reunion around the ‘cutting-edge’ pool. Ms A’s catch phrase has been “I’m funny in Sri Lanka!” 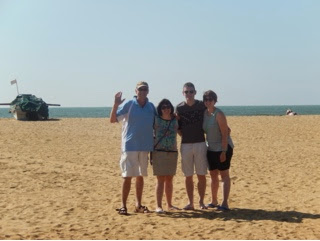 That of course is for others to judge.Dinner on the beach that night was where Mr X first developed his chronic complaint of FOOD ENVY. The recommended remedy would be that he would need to just order what Ms C had every day! It was great that Santa also visited Sri Lanka that night! 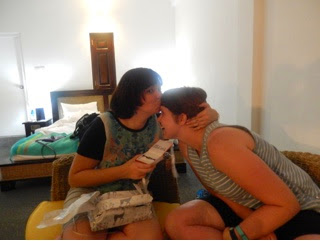 Mr X and Ms A returned from their early morning walk the following day with the news that there was a Sunday market in town…. now, what’s not to love about a Sunday market? Waiting at the end of our lane was a Tuk-tuk driver all ready to pounce with his trusty sidekick (his nephew we thought) and negotiations were held and sorted. Ms X’s idea of what she would see would be local crafts and art, maybe some fruit stalls and homeward sales. Leaving the tuk-tuk the aroma of the millions of sun dried fish, in all varieties and sizes hit us. 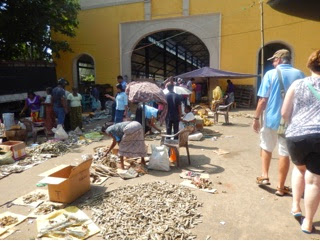 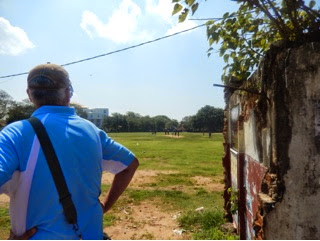 There was an purchase made however, not of fish but of half a kilo of fresh limes (to go with the g&t to be had later on) a bargain @50 cents! With temperatures on the rise, it was time to head to the “cool spot” as it was titled in front of where some local cricketers could be admired. Mr Tuk-tuk reminded Ms X of ‘spying manoeuvres’ as he hid behind stalls, never losing sight of his fare and bobbing up when the tourists least expected. Our drivers took us to the old fort (still in use as a prison) and the harbour, which was exactly that: a place where all fishing boats dock (not a Docklands development as imagined)

Our tuk-tuk divers then took the liberty of taking us to a pineapple farm, (their mate’s place) which was different than expected. Once there, we got the extensive tour around the gardens, pointing out all sorts of plants with magical healing powers. No pineapples to be seen, only a small shop where natural medicine could’ve been purchased at government regulated prices. Which meant no bargaining. With mosquito repellant in our bags we were heading back towards the hotel. A breakaway group went in search of a Money Exchange business which ended up becoming jewellery shopping, where the others enjoyed a plunge in the pool.
After a lovely beach lunch with devilled chicken for Mr X and ‘cute girl’ mock tails for the others(full moon day meant a no-alcohol day)it was time for a stroll along the beachfront. On Ms X’s recommendation (courtesy of Lonely Planet) dinner was at LORDS that night. Lovely food, quirky, spacious, part gallery/restaurant complete with a fish spa! The venue also raises funds for the Sri Lankan dogs. 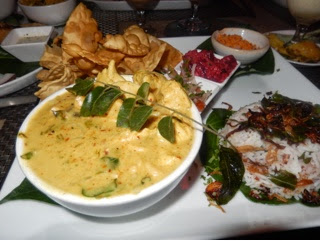 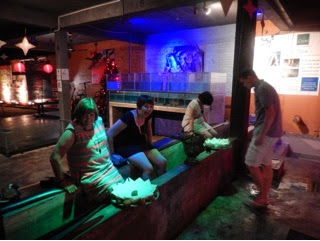