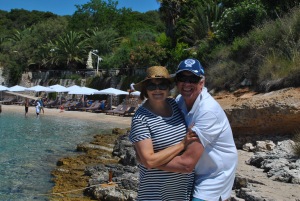 There’s two ‘Splits’. One viewed on land and one by water. We got to do both and to quote Jerry Seinfeld, both were real and both were spectacular! Ms C and Mr P had gifted a private-all- day boat trip around the Croatian islands off Split to Mr and Ms X for their birthdays.

Our Gilligan for the day was a guy called Christian who had us ‘set sail for our 9 hour cruise’ bright and early at 8.30am. 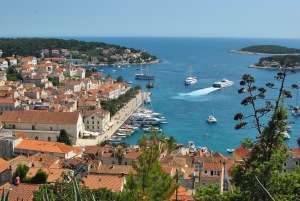 Our first stop was a little town called Milna, on the island of Brac. After a wander through the church where you could not wear shorts so the boys had their bathers on (such rebels), a potter and a boffee was had in the old sardine factory. Ms X declared the toilets there the cleanest in all of Eastern Europe. She knows she has called it early.

A swim and a lunch stop followed at Palmizana, part of the Pakleni islands. This stop will be memorable for a whole lot of reasons….

• We got to see more of Gilligan than what we had signed up for as he stripped off for a swim too.

• There were some greedy beach goers who must have been German as they commandeered 8 lounges. ( ok, so it was us but we have had the best German teachers at the old-leave-your-towel-decide-later-if-you-want-to-sit-there!)

• The disappointing botanical gardens that Gilligan had talked up- were we suddenly in Me-hi-co?

• The swim in the Adriatic Sea.

• The delicious seafood lunch of calamari, octopus and scampi

• Mr X not being allowed to order a pork chop (are we on the island of pork??)

All aboard and Gilligan took us to the island of Hvar. The touring party decided to heed Gilligan’s advice and opt for a taxi up to the fort where they contemplated life while soaking in the view. They did walk down however. It was easy to see how Hvar could transform into a party island after dark when “nothing good happens after 2 am” (quote from Ross Stevenson)

On land, Split is a mini-Rome in parts with an old Roman palace intact. Restaurants, cafes , shops and squares now inhabit the ruins in the old town. There are a lot of lanes to wander and explore and lots of spots from which to contemplate life. 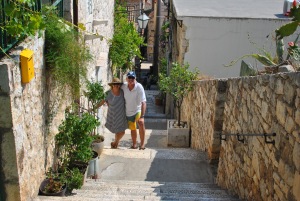 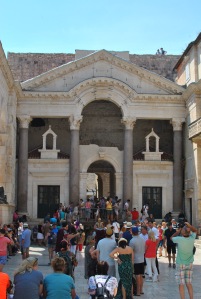