Twenty-six years ago, Mr and Ms X were offered a teaching exchange position. They had applied for a big city in the USA however what was offered was a small town,Glenwood in Minnesota. The debates were few as they both knew that different experiences were what drew them to this opportunity in the first place. So they packed up their kids, farewelled their families and friends and set off on this adventure of a lifetime.

And then there was Thanksgiving shared with the Mr and Mrs H and their adult children and spouses and the grandchildren, Mrs H’s mum and sister and her family. And of course 2 Aussies. There was the national tradition of watching the Thanksgiving NFL game, made extra special with a Vikings’ win. There was turkey, mashed potato and gravy, corn, jello salad, broccoli salad, dressing, pumpkin and apple pies, cheesecake and pavlova. 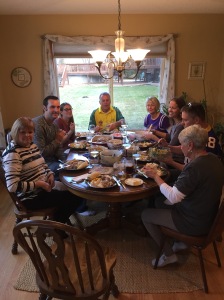 Then there were leftovers!

Our visit seemed a long one (just ask one of the volunteers at one of the school) but then in a blink of an eye it was over! Glenwood delivered. Mr and Mrs H were gracious and fun hosts. 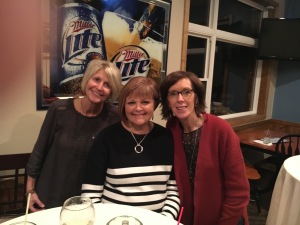 There were tears as usual as the Aussies left, with some planning for an Alaskan trip for those who are game. So it’s goodbye from the people who had lived down under the stairs.