Ms X isn’t quite sure when her interest in Russian history began.

Following all of that she fuelled it all with her appetite for books and movies, too many to list… Paulina Simmons’ trilogy The Bronze Horseman etc….. 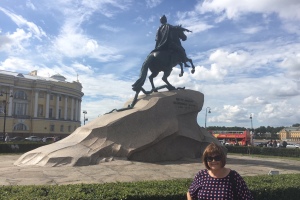 Don’t forget the Russian News on Fast Forward with Jane Turner and Peter Moon which was hysterical. Mr X has joined in along the way, sometimes under sufferance but sometimes not. They both enjoyed every episode of the TV series The Americans as well as their shared interest in visits to former soviet countries. Ms X’s Bookclub of late has recently even had to suffer one of her Russian-inspired selections. It was time this would-be spy (in her own mind) came in from the cold and visited Russia. Enough self-indulgence!

St Petersburg has been called the ‘Venice of the north’ by some and they are not wrong. The canals that twist and turn may be missing the gondolas but the architecture that borders the waterways make up for it.

Advice before visiting the Hermitage in warm weather is simple – get a good night’s sleep beforehand and don’t plan a big night afterwards. 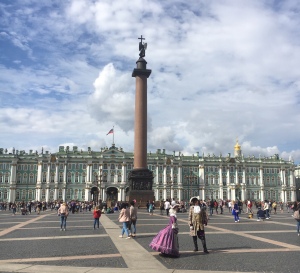 Despite the crowds and the packs of tour groups, the place is amazing. When you turn the corner and first see the huge square and magnificent green Winter Palace you are nothing but gob-smacked. Turning around to see the impressive yellow Staff Building behind you continues the thrill. The debate was had by our travellers as they plodded through the galleries – which was bigger, the Louvre or the Hermitage? Which squares were bigger- the Palace Square or Tiennamen Square. What was agreed is that they are all big and each museum has a whole lot of stuff that doesn’t belong to them. #justsayin

Staying near Nevsky Prospect meant Mr and Ms X were in the thick of the action. Getting away from the action and finding small eateries was their habit. Opting for Georgian-cuisine was their preference and they both loved the breads, the potato dishes, the fish and meat options as well as the beer and wine from this region. 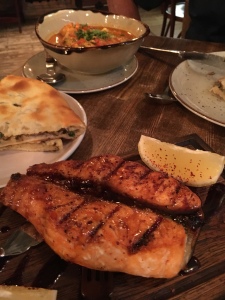 One memorable night saw Ms X being stranded at a restaurant with a bunch of Russians at 11.30 pm after Mr X had to sprint back to the hotel to get his wallet which he hadn’t taken. The restaurant staff were lovely. Language barriers didn’t matter.

Mr X got to know the locals in lots of different ways. He was in search of a laundromat and the two had covered quite a distance which found the travellers in an interesting part of town. No amount of help from google maps could show where this laundromat was. In the end the two tourists wandered into a phone shop which had a coffee shop set up in the corner (independent of each other). It was there that they made their new friend, Vladimir the barista who was unsure himself of the whereabouts of said laundromat. Vladimir with his limited English googled and phoned the laundry and then sent Mr X on his way whilst Ms X felt obligated to stay and have a corffeee from Vladimir who was nervous. He knew Melbourne had champion baristas. 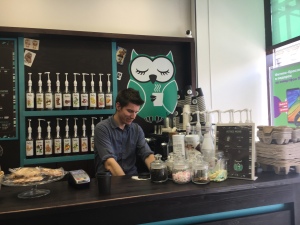 She asked if there was low fat milk. Vlad said “have skinny milk. Australia taught me make corfffeeee from skinny milk sometimes” Well done Vlad- it was a great coffee.

Mr X was in search of some Advil for his aches and pains. Visiting one of Russia’s chemists is an adventure. The chemist is fully enclosed at a window like a bank teller. Ms X had google translator at the ready and showed the Russian word for Advil. The chemist then came out of her cubby hole, went out in the street yelling “English?????” After which she dragged some random guy in who translated the diagnosis and medication. He even asked Mr X where his pains were. Hilarious. Lovely, memorable people.

There just had to be a Soviet day allocated to explore the recent history. A visit to the Kirov museum required navigating the metro which proved to be easier than first thought. Kirov was Stalin’s #2 and was leader of the Communist Party in Lenningrad, as it was previously named. 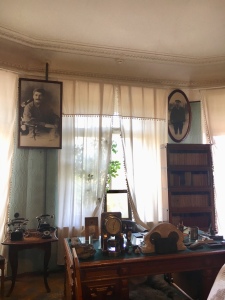 His apartment had been left untouched and walking through it gave insights into how the leaders were living whilst their people were lining up for bread. He had an interesting ending.

Dropping by the previous headquarters of the KGB The Big House provided a confronting experience. Ms X had her phone on trying to translate the name on the building to learn what it was used for now. 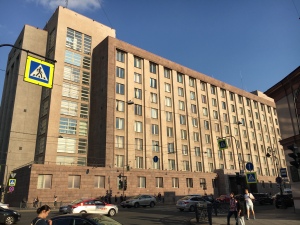 She quickly twigged as an armed officer came up behind her “what you do? It not for you” Ms X then knew immediately what it was used for. #samesame

Many of the underground stations are like art galleries with murals or museums with statues. 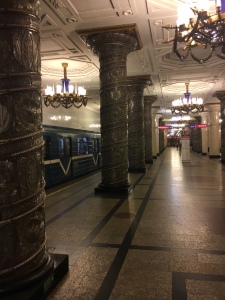 One even has chandeliers. Amazing. A metro train ‘hop on and off’ afternoon navigated by Mr X, provided many sights in and off the trains.

A visit to Peterhof, the summer palace of the former Tsars was again incredible.

Mr X went from being amazed by the palaces, gardens and fountains to being sickened that this was here whilst so many of the countrymen and women were starving.

Russia is known for its Bolshoi Ballet which is stationed in Moscow but currently on summer horlidaaay. The travellers opted for a production of Tchaikovsky’s ‘Swan Lake’ at the Alexandriivsky Theatre which was stunning.

Getting to your seats was interesting. Ms and Mr X had seats in a box on the 5th tier of balconies which needed ‘the man’ to open a little door with his big allenkey. 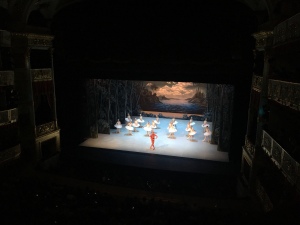 Despite not doing any homework on the plot beforehand, both managed to stay awake and Mr X even had banter after the performance.

St Petersburg is well worth a visit, not only for its rich history and surrounds but for its everyday people who were so friendly and welcoming. 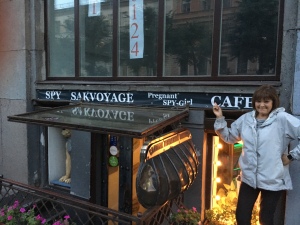