And so it came to pass that the final leg of this adventure would take our travellers to Moscow. Arrival by train from St Petersburg was smooth without fuss on one of their high speed trains.

The train staff even wore white gloves whilst they wheeled their trolleys up and down the aisle and carried your luggage on board for you- a good start Ms X thought.

The Hotel Sadovnicheskaya was also warm and welcoming with Alla at check-in exhausting the already weary two, with all the special things on offer. “We even have a private Banya free of charge for 2 hours each day for you” Sigh! Too much to think about thought the pair.

Moscow has to be THE CLEANEST CITY in the world that these two had ever experienced, even cleaner than Singapore. Streets and gutters were continuously being swept or sprayed. 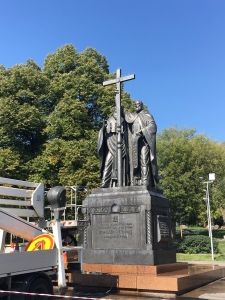 When meeting for a walking tour, it was confusing as to the correct monument as …… you guessed it, it was cleaning time.

As soon as the backpackers walked to the end of their street, each day, they were greeted by the amazing St Basil’s Cathedral. The colours and splendour of the church cannot be properly described. If either of the adventurers lost their bearing, they just had to find that spire to reset their course.

The big surprise was Red Square. Ms and Mr X were expecting Tiannemen Square however this one seemed narrow and was full of scaffolding as the annual Military Tattoo was soon to take place, making it difficult to gauge the size of the area. Following that there was to be another event to take its place. Methinks Mr P might not want big areas left vacant for too long. #justsaying #nospacetogathertoplotanotherrevolution!

The Kremlin is a big triangular area with the usual ticketing system found in Russia. Very few signs and a ticket box located far away from the entry gate. You seem to be competing in the ‘Amazing Race’ TV show just to get the ticket and get to the entry gate within the shortest amount of time and that’s without queues and these two travellers just weren’t always great contestants. The Kremlin is a fortress with a whole bunch of churches and museums inside. 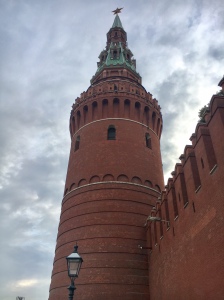 The churches are really like museums or mausoleums as there are a lot of old tsars inside. Mr and Ms X found this area a little repetitious however one highlight had to be Mr Putin’s HQ. Lots of security and interesting staircases leading down under the ground. Hmmm? Spygirl suspected more under the surface activity than what could be seen.

Unlike the queen, there is a flag flying all the time regardless of whether Mr P is home or off visiting a mate.

There’s a tunnel underneath the Kremlin’s working office of the President to its Parliament House which is outside the walls. Mr P also has a designated middle lane on the highway just for him and other officials that runs from his office to his home in the ‘burbs.

Outside the Kremlin is the Tomb of the Unknown Soldier and the changing of the guard ceremony happens on the hour. And yes, it includes John Cleese’s silly walk, otherwise known as the goose step! 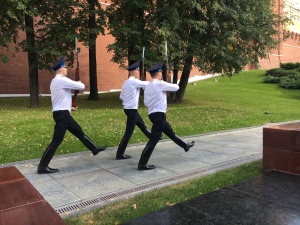 After much research, several days had been planned with a private guide for the tourists. Both guides were excellent however they were chalk and cheese.

On day 1, Elena, otherwise known as Red Sparrow… hat, glasses, leather skirt, no smile if I don’t have to and ready to lead the next revolution.

Day 2 was with Oksanna, otherwise known as the Motherland’s next President and who voted for Mr P, is ready to do anything needed for the motherland and believes ‘life better in Soviet times.’ Mr and Ms X appreciated their time with both guides and learnt so much more about Russia that can’t be found in a Lonely Planet guide. Oksanna was impressed that Mr and Ms X were not the usual tourists and that they were going ‘off the beaten track.’ 😳😳😳😳

A tour and explanation of the metro, a private visit to Stalin’s private bunker, a Secret Soviet military bunker 16 floors underground were guided by Red Sparrow.

Red Sparrow had no time for the soviets or Stalin or the current leadership so although she was concise with her comments, she didn’t beat around the bush. She hoped she could find a copy of the black comedy “The Death of Stalin” as it is currently banned in Russia.

Oksanna on the other hand was horrified that anyone would make such a movie let alone want to watch it. She debated Donald Trump and a whole list of interesting controversial topics. The tourists had to try really hard to be respectful and behave. She guided the pair to the Space Museum which was AMAZING 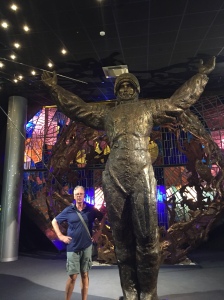 however, hmmmm, we do recall the Americans having a good deal of success too.

The Soviet Agricultural and Industrial Exhibition Park was …… there are no words! Massive exhibition sites for all the 16 Soviet Provinces when it opened n 1956. No expense spared to build this propaganda Disneyland.

There was a visit to the Park of Fallen Heroes where all the monuments of all former leaders who have shown their imperfections and disgraced mother Russia are now found, pretty much unloved, beside a monument to the Victims of Totalitarianism. 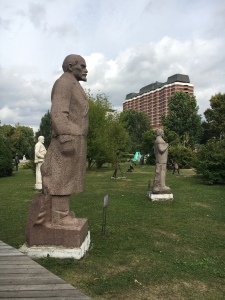 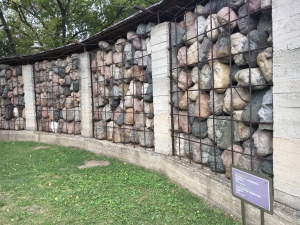 Oksanna’s greatest moments came at the WWII Museum which Ms X had thought Mr X would like to see. 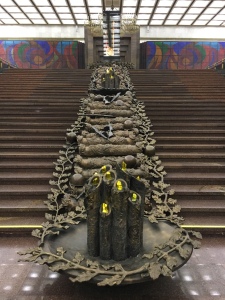 After the visit, one was left to believe that it was a war just between Germany and Russia and the Red Army was again victorious. Hmmm. A pattern was forming with Oksanna- first the Space Race and now WW2.

Seeing as Mr X and Ms X had on previous adventures already dropped by to see Mao Tse Tung and Ho Chi Minh, a quick visit to see Vladimir Lenin was ticked off.

Ms X still had lots on her “to do list” so it was a matter of working through the plan. A visit to the Hotel Moscow (now the Four Seasons) was completed. Stalin had been shown the plans of 2 different architectural designs for this hotel and he apparently approved both. The story has it that everyone was too scared to tell him that he should choose only one as they were completely different hotels so both were built as one hotel! 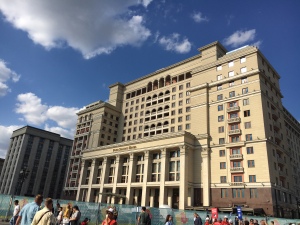 The other hotel that needed a visit was the historic 1907 Metropol Hotel. The Art Deco features and the sense of the place when one entered was amazing . 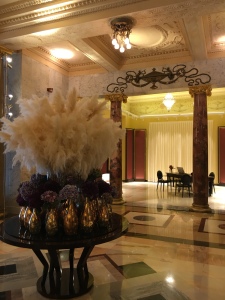 Ms X, her daughter Ms C and her friend, Ms K had all read the book “A Gentleman in Moscow” with the setting of the novel being this hotel. Ahhhhh. Just like in the book. It was a great place for a boffee. 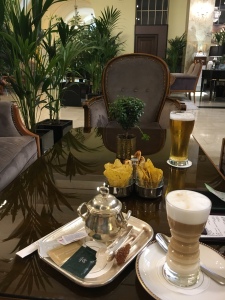 The beautiful GUMM department store (think Harrods) with all the high end brands continued to sometimes surprise and bamboozle Mr and Ms X. It seemed like Russia is a bit of everything. 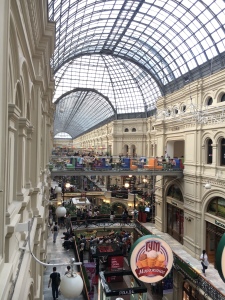 Proud of its history, clinging to its socialism yet attaching itself to capitalism in many places.

Moscow was a great place to visit. Mr and Ms X saw and did lots but there was still so much more if time permitted. In the words of one Moscovite tour guide:”Visit Russia, before Russia visits you!”

One thought on “Last tango in Moscow.”