From the moment you arrive in Lisbon, you feel very much welcome. The Portuguese greet you with a friendly face; the airport procedures are orderly, assisting in an easy arrival and the exit to your hotel works smoothly via an efficient metro. 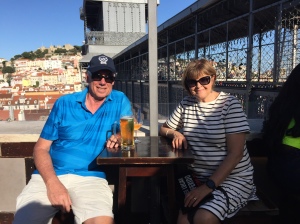 It’s when you hit the streets by yourself that you realise the challenges these Lisbonites face each day….. those steep steep inclines that dominate the city!

What a workout these Lisbonians get every day. Planning your route around uphill and downhill streets and the availability of elevators and escalators becomes your holiday habit.

A walking tour with an Ashley Webber-look alike(Bruno Mimossa) got Mr and Ms X accustomed to the city of Lisboa however Mr X is checking Bruno’s facts as Ms X types this!

One way to get around town is to take the ‘historic’ No 28 tram. Now as trams go, these Melburnians would need this ride to be a bit special to impress them and this delivered. It rattled around the corners and sometimes it felt like an amusement ride when it chugged up the hills and glided down the other sides.

It’s inevitable that these two were going to play their ‘ Name a famous Portuguese’ as well as their other favourite ‘What did the Portuguese do for us?’quizzes.

Of course Vasco de Gama came to mind and the Portuguese still honour him and his explorer buddies in quite an impressive monument.

Old Vasco is also found in the cathedral in Belem.

There’s also Magellan but he didn’t seem to be the flavour of the month. Not much at all about him. There’s the children of Fatima who witnessed a miracle and Christiano Ronaldo was also mentioned and then……. hmmmm still thinking. There ain’t many.

If you ask Ms X what she thinks is the biggest contribution from Portugal, she would say without a doubt that it is:

The Portuguese custard tart and having one from the bakery where they originated was a real treat.

Tiling is also a gift from the Portuguese as well and how lovely were those buildings.

Portugal has also got the world’s oldest working bookshop. Dating back to 1732, its walls could tell some tales. 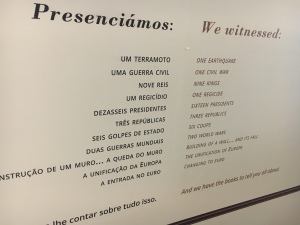 There’s a fort that must have been used in Game of Thrones as well as churches and monasteries that all tell their own stories. There’s a statue of this poet who used to sit in the Main Street with an empty chair beside him so he could share his version of the meaning of life. Did I mention the hills?

Lisbon is a great place to visit but be warned-Bring your walking shoes and an empty stomach for those custard tarts!