To have 3 Aussies and a Dutchman all ordering different components of a full English breakfast is always going to to be a challenge however you are asking for trouble if you are taking the order without using pen and paper.

That’s just what happened – trouble. We were treated to a touch of the Basil Fawltys as those who didn’t want mushrooms or tomatoes or bacon or baked beans ended up with precisely those items!! We were all too polite to complain.
With Mr P in the front seat with Tommy Tom-Tom, next to Mr X, we sailed through Devon enjoying the challenge of the narrow laneways eventually stopping at Plymouth.There was a fair bit of Mayflower and Pilgrim monuments and landmarks however Mr P was very much a doubting Thomas. Is it the town planner in him that made him stand and ponder authenticity of the spot from where they ALLEGEDLY departed…. Hmmm 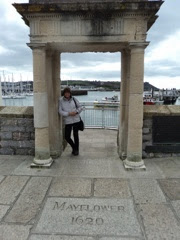 Boffee (beer+ coffee) was split that day with a breakaway group going to the pub and the other group off to a tearoom. You can guess the groupings.
Back on the road with a stop in Padstow for lunch and pasties at Rick Stein’s deli which is part of his empire in the town. 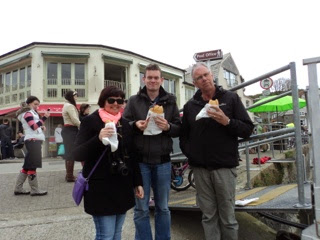 The group was entertained by the number of people fishing for crabs, with not a lot of success. Padstow was a pretty place but it was crowded with so many kids, tourists, families, people and dogs. We have nothing against them all however there were SO many of them that day…

Ms X was keen to get on the road and head to Port Isaac so ‘goodbye Padstow’.
The drive to Port Isaac was indeed tricky….lots of twists and turns… Miss C said it was like ‘ a ride!’. Highways that turned into one lane roads that turned into back alleys where if two cars meet, one had to reverse far enough to let the other one tt
Hero ugh. Quite bizarre.
All the touring party LOVED Pt Isaac. So picturesque. 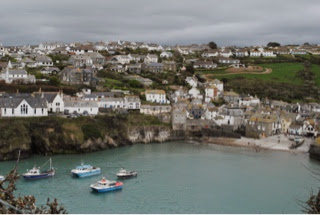 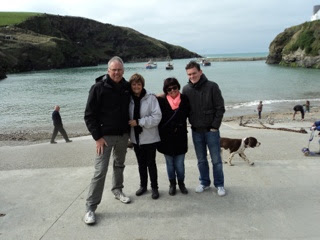 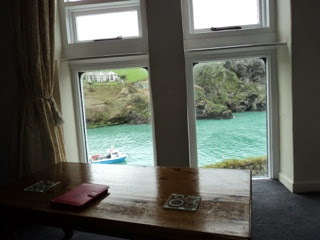 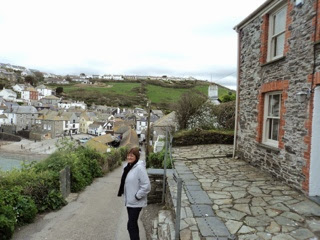 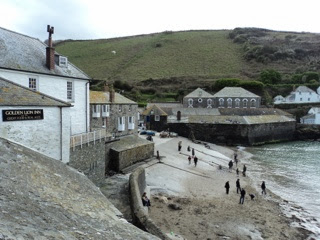 As followers of the TV show Doc Martin, Ms X and Mr X enjoyed walking through the town and picking out all the spots where the show is filmed, the Doc’s house, the chemist and of course we were staying at The old Schoolhouse Hotel and had dinner at Bert Large’s hotel. All good fun. Ms X had often watched the show wistfully stating that she could live in Cornwall and would like to walk down the road from the doc’s house to the schoolhouse. She can tick it off the bucket list now, however living there might be a bit if a stretch. Perhaps lots of “mini-breaks”?