Skip to content
Date: April 26, 2014Author: backpackingwithwheels 0 Comments
Growing up, both Mr and Ms X had heard and read media reports of the conflict in Ireland, or more specifically Northern Ireland. Hearing about it and having an understanding about it are two different things. They could tick the box for the first but definitely not the second.
A walk around Belfast was the first eye-opener. Lots and lots of businesses closed and lots of ‘For rent/Lease/Sale Signs’. Everywhere was clean, however it wasn’t a place in which you would choose to walk alone.
A stop at the museum had been suggested to provide a quick ‘ Belfast History for Dummies’ session. 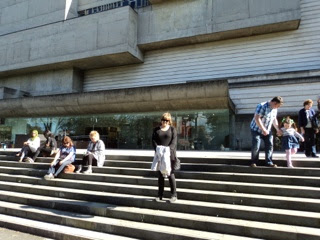 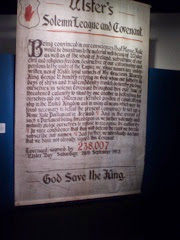 Not a lot of success there. It seemed to jump from the Ice Age to the potato famine to the 1900s….. Hmmm, a bit missing however a mould of St Patrick’s hand was impressive. 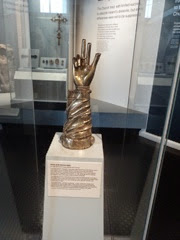 The next day it was time to call in an expert. ‘John’ the tour guide picked up Mr and Ms X as part of the Black Cab Tours and personally drove them through the streets of Belfast explaining the conflict, or ‘The Troubles’ as they are known as.
There are specific areas within Belfast for the past and present warring-factions to reside in and then other areas that are known as mixed areas. There are schools and pubs that either the Protestants (loyalists) attend and  likewise for the Catholics (republicans). There are hidden rules for this city to abide by – hidden for the outsider but well known to those in the community.
We were driven first into the Shankill area- the Protestant/ Unionist/ Loyalist area. 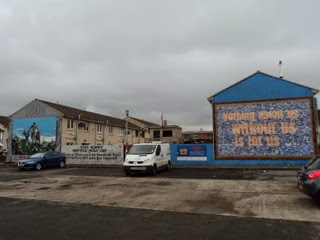 The area was bleak and dismal with evidence still remaining of ‘The Troubles’ of the past and plainly of the current ones. The local school and Nursery school looked almost prison – like.  Houses proudly flew the Union Jack and pictures of the Queen adorned windows. 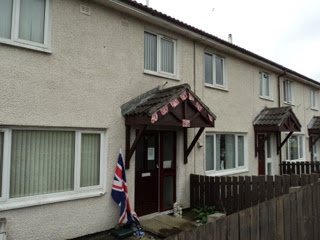 As Mr amid Ms X walked around the streets it appeared at first like a ghost town, however they felt there were numerous sets of eyes watching them from behind their curtained windows. Their guide, John confirmed this would have been the case.
All through the area, murals appeared on walls, on sides of shops and houses, each telling their own intriguing stories. 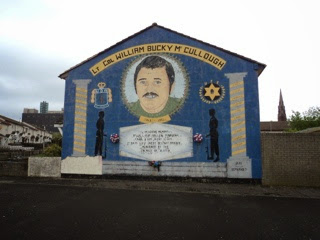 They each told a story and John briefed us on each. 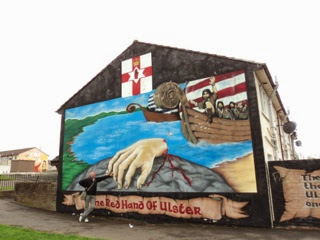 Some were memorials to the area’s deceased heroes whilst some told of previous battles. 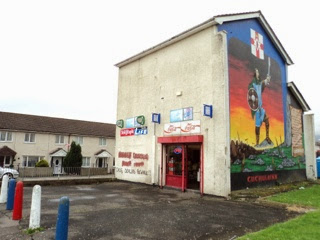 Next stop was ‘the Falls’ – the Catholic/ nationalist/ republican sector. Murals were very much part of this area but this community also chooses to highlight other countries’ struggles that they believe they have a strong connection to through their International Wall. 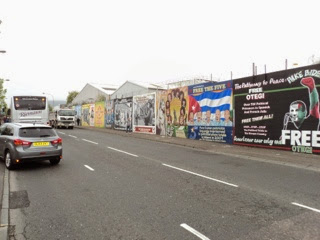 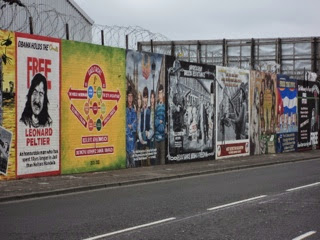 As a reult of the agreement that was signed in 1998 there have been Peace Walls constructed separating these communities. 10 metre high walls with gates in between that are locked each night so that there would be only one entry point into each area each night making it easy to identify any people who are unwelcomed.
THIS IS HAPPENING NOW IN 2014!!!!
Ms X adds to the messages on the republican peace wall…… 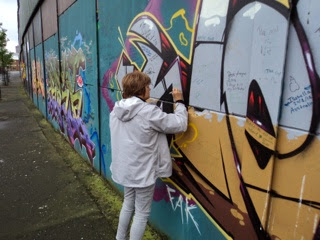 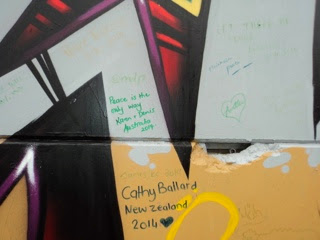 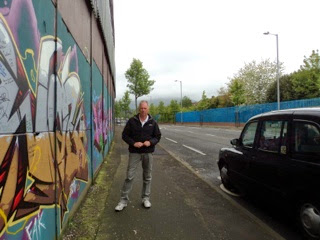 The blue fence opposite is the peace wall on the loyalist side.

These two areas are the main segregated areas in the city and the places where the most violence occurred and still occurs although there are pockets throughout the rest of Belfast as well as Derry.
Will this conflict disappear with the next generation? John reassured us that it wouldn’t as traditions are passed on in Northern Ireland and this tradition shows no signs of  becoming obsolete.
John summed it up ‘it’s a trust issue’. ‘Its not about religion’ he said, ‘it’s about national identity. One group identify as English and the other as Irish’
Oh how lucky to live in Australia.